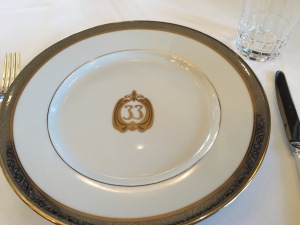 I had heard a number of rave reviews from friends that had been lucky enough to set foot inside Disneyland’s exclusive Club 33. Oddly enough, none of them had mentioned the iced tea.

For those of you who are not familiar with Club 33, this is a somewhat secret and highly exclusive club located in the New Orleans part of Disneyland on the second floor of one of the buildings near Pirates of the Carribean. It was originally designed by Walt Disney and intended for corporate sponsors and other VIPs. After opening in 1967 a limited number of memberships became available for a pretty hefty price. Currently there is an initial fee of somewhere between $25,000 and $40,000, with annual dues of around $11,000. To be able to dine here you don’t necessarily have to have a membership, but someone who does have a membership has to make your reservation. Also to get into the members’ bar and lounge, a member has to accompany you.

After years of anticipation, I was finally able to make it into Club 33. This was one of the best dining experiences I have ever had. The great tasting, fresh brewed iced tea was a perfect compliment to the incredible food, service and atmosphere.

The meal started out with our waiter giving us a very extensive drink menu that had everything from beer, to spirits, to mixed alcoholic and non-alcoholic drinks. One thing that did give me pause was that while there was a number of hot teas on the menu, I didn’t specifically see any iced tea. Luckily after asking our waiter for a “black iced tea” he promptly brought me one. As I said before, it tasted great. It also had a black straw, which for whatever reason always classes up any glass of iced tea.

The three course meal continued and our incredible waiter was quick with the refills of iced tea to accompany the great tasting food.

You probably are not going to find many people who will argue that anything in Club 33 (including the iced tea) is a very good value, however the great atmosphere, service, and exclusivity really make up for that. With that in mind, this may be at the top of my all time list of places to get iced tea.