Starbucks serves fresh brewed Teavana brand black iced tea. From what I have found out, their iced tea is a black tea blend specifically made for Starbucks. I have not been able to find the tea they brew in stores for home brewing. I enjoy the taste and it is always very consistent from one Starbucks location to the next. It’s also “shaken” which makes it a little frothy. This makes their iced tea a little different tasting, but nice. There are however a few drawbacks to Starbucks iced tea that keep me from drinking it on a regular basis.  First, it is pretty expensive. At most locations the price is just under $3 for a venti and over $3 for a trenta.  This is at least $1 more than most other popular places where one would get iced tea. Second, I find that even if you ask for light ice, there is usually too much ice and too little tea. A few sips of any size and it is gone.  Also there is no opportunity for free refills which is frustrating at that high price (see updates below).  Lastly unless you specify “unsweetened iced tea”, the default is to make it “lightly sweetened”.

1/1/2016- Update: It was recently brought to my attention that if you have a Starbucks gold card you can get free refills.  And it sounds like it doesn’t take a whole lot of effort to keep the gold card status.  This does slightly increase what I think of Starbucks, and I changed my rating from 3/5 to 3.5/5 when I found this out.

2017 Update:  On a recent trip to Disneyland, my view of Starbucks iced tea changed drastically for the better.  I had long heard rumor of being able to get free refills of coffee and iced tea with a gold card, but until this trip I had not got a chance to actually see if this worked.  I bought an iced tea in the Downtown Disney Starbucks location nearest to the park entrance (yes, there are now two locations, the other is next to the Lego Store).  I sipped on the tea for a few hours while I fought the crowds in Disneyland, but I held onto my empty cup.  I later went into the Main Street Starbucks location inside the Disneyland park and asked the employee at the counter if I could get a free refill with a gold card. The employee politely said that this location didn’t offer gold card refills, but they did at the Downtown Disney location where I had originally got the iced tea.  I made my way over to that location and sure enough I was able to get a free refill of iced tea despite the fact that on the cup it said I had got the original ice tea more than 4 hours prior.  After further research I found out that normally you only get free refills on the same visit, but at least at this specific location they didn’t seem to mind that it wasn’t the same visit. Here is the exact wordage on the Starbucks website regarding free refills: 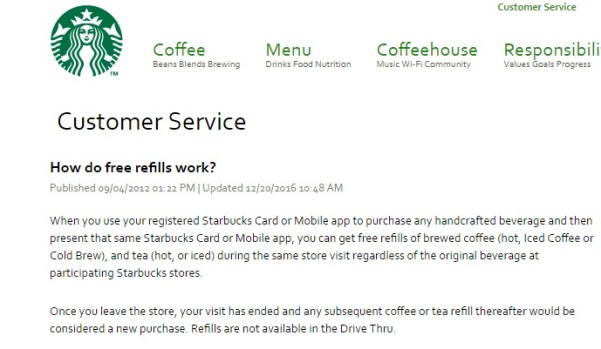