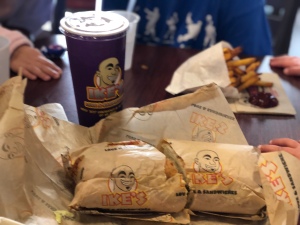 Ike’s Love and Sandwiches is a funky joint that got its start in The Castro district of San Francisco in 2007.  Ike’s is known for it’s unique sandwich offerings that have equally unique names like “Menage a Trois” and [Name of the Girl I’m Dating].  I first reviewed Ike’s iced tea in 2016.  At this time, I gave them 0 out of 5 and the review read “As much as I like the sandwiches here, they don’t have any plain iced tea options.”  Since then, Ike’s has expanded to over 20 locations on the western part of the U.S., and has also made major improvements to their iced tea selection.

First Ike’s offers bottled Tejava iced tea. If one is going to drink bottled iced tea, there is nothing better than Tejava. Read more about Tejava here.

Ike’s also now has a fresh brewed option. The brand of tea is Tractor, which I had never heard of prior to trying it here at Ike’s.  Tractor tea is 100% organic, GMO free, kosher, vegan and gluten-free (I can see all the non-Californians rolling their eyes).  The tea was not the best tasting.  I think a few things are going on here that probably isn’t directly related to the quality of the actual tea.  As you can see in the picture, there are multiple tea flavors. I think I was able to taste some of the other flavors in the plain black tea, because of the way the tea is likely brewed.  For a black tea purest, like myself, this is a point against them. I go into detail of the problem of flavors of tea getting mixed here.  Next as you can see the dispenser that is used is very similar to the one used at Panera.  From my experience at Panera, I think these types of dispensers negatively affect the taste of tea.  This may seem like a minor thing, but Panera’s tea dropped from being one of my top iced teas when they switched to these types of dispensers. 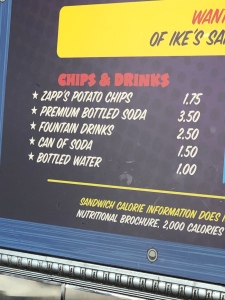 The price of the fresh brewed tea is not bad at $2.50 and refills are self-serve.  The bottled Tejava, on the otherhand, is quite pricey at $3.50.